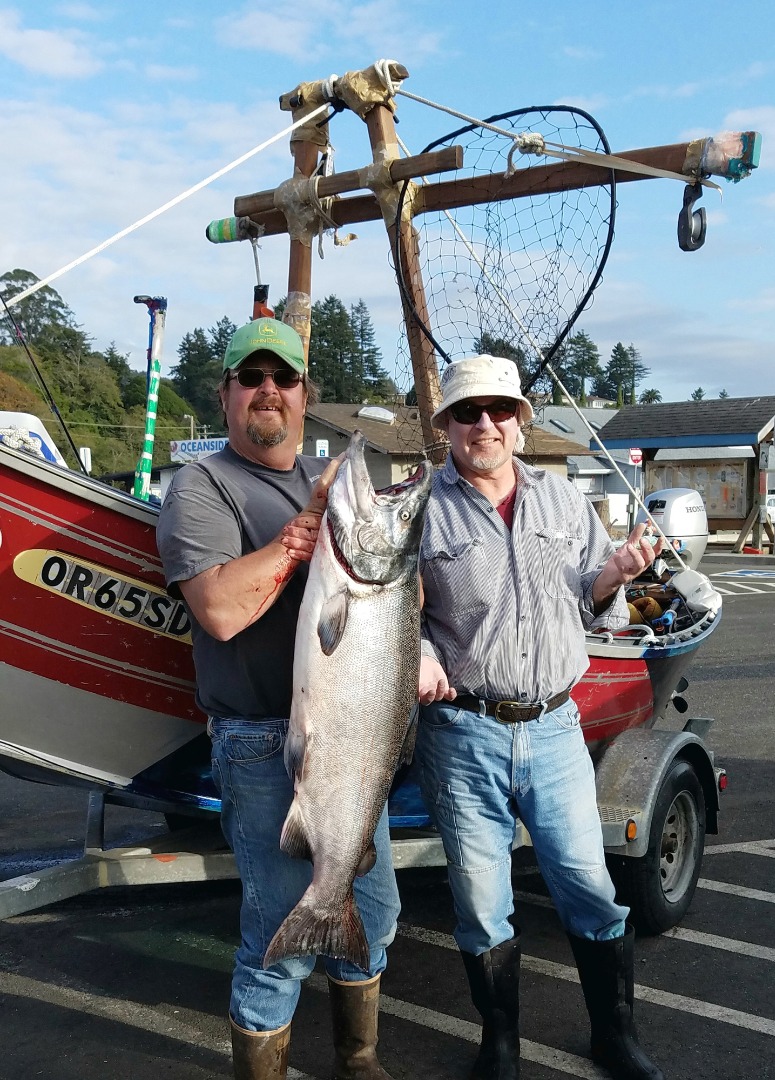 Richard Christensen of Brookings hoists a 39-pound Chinook he caught while trolling a spinnerbait/anchovy rig in the Chetco bay last week. Photo by Larry Ellis.

In the Rogue bay, if you didn’t have one on, someone around you did.  And that’s what keeps people on the water, knowing that there are fish to be caught.

“We have less than 20 boats fishing the bay,” said Jim Carey from the Rogue Outdoor Store in Gold Beach on Thursday.  “We’ve got several people trolling off the mouth of Indian Creek, so some of the Indian Creek salmon are coming in.”

You’ll know if you’ve caught one of these puppies.  They will be missing an adipose fin and they will have a slight bronze tint to them.

“Guide Jay Lander’s been on the water and catching a lot of wild fish, and he’s also getting one or two hatchery fish as well,” says John Anderson of Memory Makers Rogue River Guide Service.  “He’s caught a few Indian Creek fish but he has also found a few hatchery silvers.”

So bone up on your Chinook and coho identification because this time of year, the silvers could be between 8 and 14 pounds and can often fool the best of fishermen. All wild coho must be released, however, you are allowed to retain hatchery (adipose fin-clipped) coho.

Anderson said that at 1 p.m., guide Mark Van Hook had at least 2 Chinook on the boat and had released a wild silver on Thursday.

“We had 4 people in my boat from Idaho, and we did really good today,” commented Van hook.  “We really put on a clinic. We ended up with 7 Chinook.”

In addition to the coho and kings that were being caught, a healthy showing of summer steelhead still kept anglers’ rods bent double.

“I did have several people talk about how good the summer steelhead fishing has been upriver,” noted Carey.

Chetco Bay Still Producing Chinook
The Chetco bay has still been producing fair numbers of kings, with the vast majority of them being of the jack persuasion. This large influx of jacks will prove to be a bonus for next year’s 3-year-old returns.

Normally, the jacks show up first, followed by the larger 3-, 4- and 5-year-old kings.  But, this year, there have been several kings pushing the 40-pound mark mixed in with the jacks, like the 39-pound monster that was caught last week by Richard Christensen of Brookings.  Christensen was trolling a spinnerbait setup when the near-40-pound behemoth engulfed his anchovy.

In the Chetco estuary, an incoming high tide is usually the best tide to fish.  If the peak of high tide coincides with the low light of the early morning hours, your anchovy is merely a baitfish waiting for a hawg Chinook to happen.

Chetco Bubble Fishery
In the ocean, just outside the jaws of Brookings’ north and south jetty, anglers will be trolling for the big hawgs that the Chetco is known to produce. The first leg of this fishery will take place Saturday and Sunday, October 6 and 7.

Weather will be the determining factor that will tell anglers if the fishery is a go or a no.

Several reliable anglers have noticed that there are lot of humongous arches on the fish finders, just outside the Chetco River mouth. Those arches represent Chinook that are just waiting to head upriver when the first freshet occurs.  So it’s not a matter of “if” anglers will be hooking up with these Chinook; it’s merely a matter of “when” their rods will connect with one of these kings.

There are, however, certain rules that pertain to this fishery.

Second, the daily bag limit is only one Chinook.

Third, all Chinook must be at least 28 inches long in order to be legally kept.

I predict that anglers will be quite successful in this very popular fishery.

The second leg of the bubble fishery occur on the next weekend on Saturday and Sunday, October 13 and 14.

All eyes will be on the commercial fishermen, who will be fishing this bubble fishery between October 8 through October 12.

Bottomfishing Fair to Good - Crabbing Excellent
Anglers who have fished the Brookings Harbor reefs have had reasonable success on catching limits or near-limits of rockfish and lingcod using leadfish and soft plastics.

Most anglers are heading south to get their bottom-grabbers.

Dungeness crabbing in the ocean has also been quite good, with crabbers catching limits of jumbos in the 6- to 8-inch range. 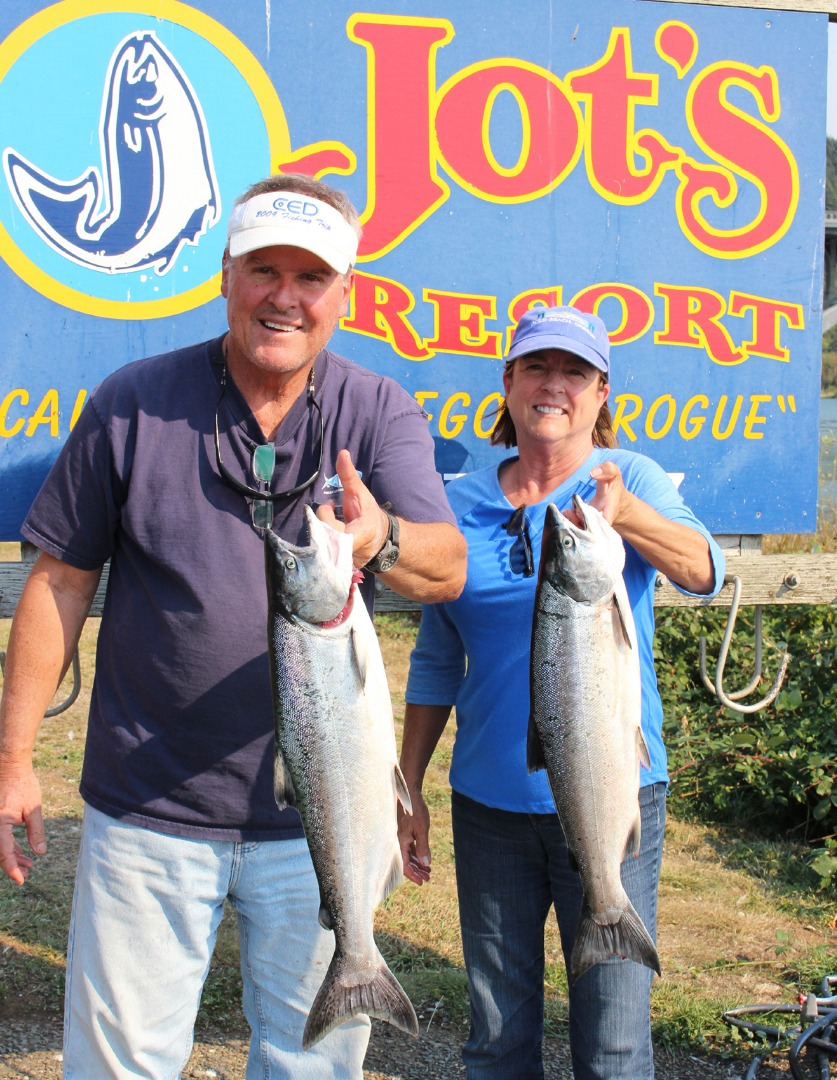 9-29-2018
The Rogue bay is still producing enough Chinook to keep boaters trolling in the estuary.  The sizes have ranged to...... Read More 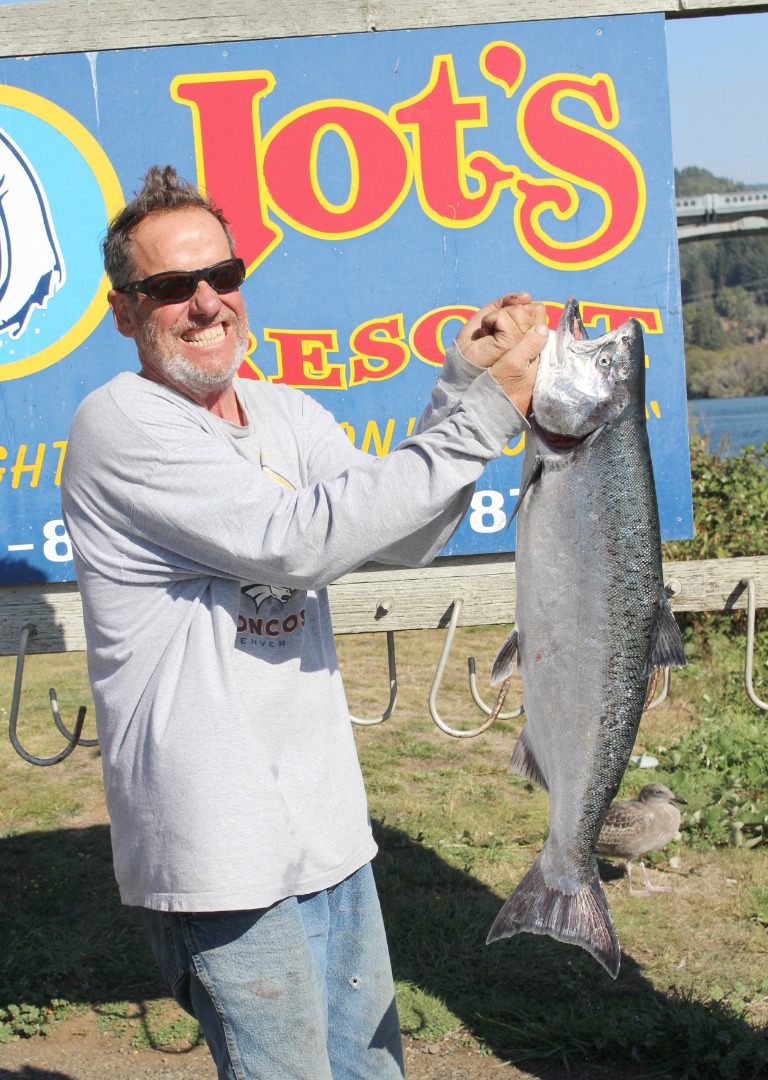 9-21-2018
The Rogue bay and Chetco bay continue to please anglers as they continued to catch a variety of Chinook sizes...... Read More